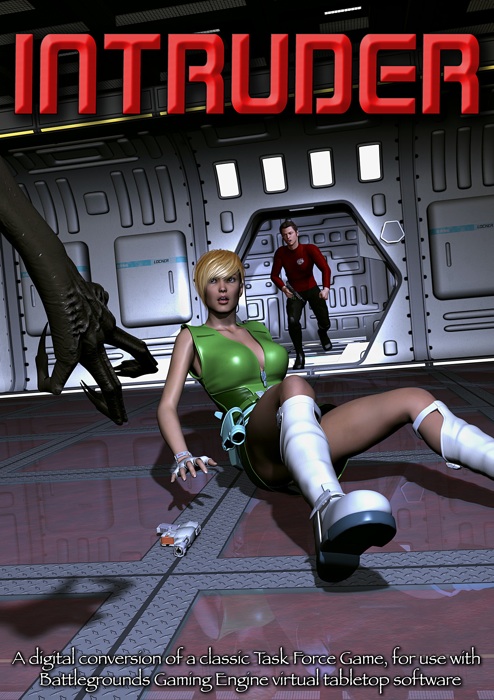 The "Intruder" Game Box is an updated and enhanced digital version of [urlx=http://www.boardgamegeek.com/boardgame/2613/intruder]a long-out-of-print game[/urlx]. It is being re-published for use with BGE with permission from the original designer (and current copyright holder), Dennis Sustare.

About the Game:
Originally published in 1980 by Task Force Games as one of their [urlx=http://www.boardgamegeek.com/wiki/page/Task_Force_Games_Pocket_Games]Pocket Game series[/urlx], "Intruder" is a 1 to 3 player science-fiction game of terror and suspense aboard a deep space station.

Game Summary:
The Intruder is an alien being of unknown power. During the course of the game the Intruder will move through the space station as both the hunter and the hunted. One or more players must cope with a monster that moves rapidly and changes continuously as it undergoes metamorphosis into a more powerful being, and possibly divides into two or more clones.

The game includes tokens representing the crew and their weapons, lab animals (which confuse the search) and the Intruder. The gameboard shows in detail the interior of deep space station 'Prometheus'. The gameboard also contains special charts to record the development of the Intruder.

I invite everyone to [urlx=http://www.battlegroundsgames.com/Intruder_Rulebook_for_BGE_Preview.pdf]download the first six pages of the 30-page rulebook[/urlx] to learn more details about the game and to see if it peaks your interest. 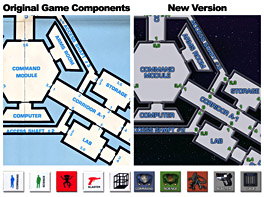 So what exactly is a "Game Box"? Game Boxes for BGE are simply a distribution package, which includes an artpack containing the playing board (generally a map), digital tokens (in lieu of cardboard counters or plastic minis), and the game's charts and tables. Game Boxes will also include the following files (where applicable): dice macros, Game Files and Deployment files, custom Turn Sequencer settings and Preferences, a rulebook in PDF format (searchable), and installation instructions. In short, everything needed to play the game if you already have at least one Gamer Client license (BGE v1.1 or higher). For multiplayer games, the extra players do not need to purchase the Game Box, but they will need a Gamer Client of their own, or they can use the free BGE Demo if the person hosting the game session has enough free Player Slots available for them to use.

I am also including templates for creating your own custom game tokens that match the official game tokens (very handy for players that love the game and would like to expand it with their own units).
Last edited by heruca on Sun Jan 15, 2012 11:10 am, edited 2 times in total.

"Less is more. This game gets on with it, and wastes no time with frills. An excellent solitaire game."

"Intruder is a cooperative game with excellent solitaire rules, but it can also be played with one player running the Intruder for a more challenging game. It is an unlicensed game based on the origial Alien movie (1979) directed by Ridley Scott, and captures the feel of the movie fairly well. There are other similar games, like The Awful Green Things from Outer Space and The Vesuvius Incident, but none are quite as fun as Intruder."

"Another fine offering from Task Force's pocket game series. I haven't played them all, but those I have played have been consistently above-average games and this is one of their better offerings."

"I recently bought a mint copy of this, to remind myself of how much I loved to play this game back when it was new! And, just for once, it WAS good to revisit the old times. This is still one of the best solo games out there."

"Probably the best solitaire game I have ever played." 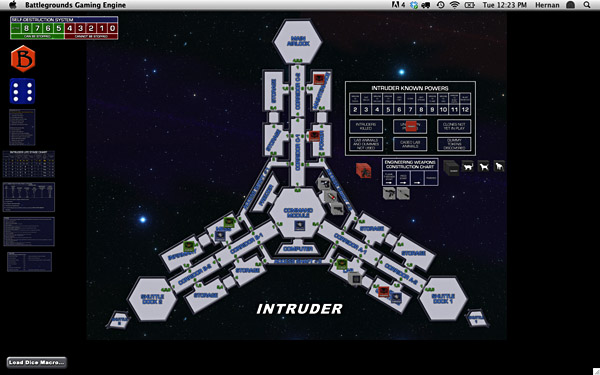 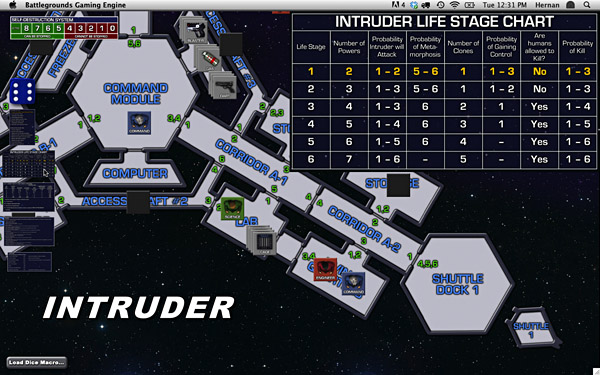 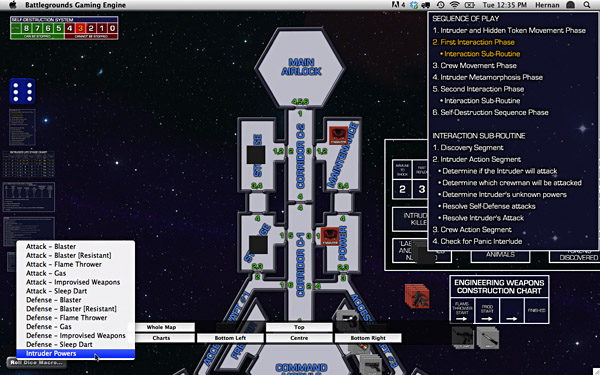 Hopefully those screenshots will give a good idea of what it's like to play the game in BGE.

I haven't been active with Battlegrounds in a little while--face-to-face RPGs, birth of a son, transition to a new job, and all that--but I love the work you do. I'd been holding off on getting BGE, but with Intruder I think I'll have to ask the wife for permission to get both, and see if she'll play it with me.
Top

In case you don't know, you can play this and all other game conversions released to date for BGE using BRPG instead (which you already own). Some folder names differ between apps, but email me if you're not sure where something is supposed to go during installation.

BTW, congrats on the birth of your son and the new job.

How do I get the "Intruder" update?

Well I purchased the game from you n 2012. I remember playing and noticing that the dice roll for the intruder's powers was missing. I sent you an e-mail and you sent me the file.
Top

Ah, you're quite right, just found that email and re-sent it to you.