Steve Gaudreau, who many of you may know as "Supercaptain" from the Dundjinni forums, is the artist responsible for this artpack. The artwork in this artpack for BRPG is largely the same as the map-making artpack that Supercaptain was selling on his former (but now defunct) website, http://www.ninegods.com, but it has been adapted (both pruned and added to) to be more suitable to use in BRPG.

In addition to the main course of mine carts and tracks (straight sections, curves, splits, junctions, etc.) the artpack also contains stand-alone elements to further customize your layout, audio clips to set the mood (and creep your players out!), and even some bonus artwork that has nothing to do with the Mine theme.

All told, this artpack contains 159 media elements, including 149 graphics (including some which are color mods of the original tokens, for additional variety, and some of which are new) and 10 audio clips (a few of which can be set to loop continuously). You can use these sound effects to help create a more immersive environment.

All 149 images in this 97.8 MB artpack come pre-sized and pre-rotated for use in Battlegrounds. The artwork is all high-resolution (122 pixels per cell), so it won't pixelate even at full zoom in BRPG.

The artwork is broken down into the following categories:

Figures:
Dragon (1, a Platinum Dragon, the only figure in this artpack)


The "SC's Mines" artpack costs $9 for GMs (but, like all artpacks, is free for players). It can be purchased from the BG Store. Half of the proceeds will go to Supercaptain (the artist), and the other half to support continued development of BRPG. And if this artpack does well, Supercaptain might find it worth his while to create more artpacks for us in the future.

Note that players will need to have this artpack installed during sessions where the GM will use it, and everyone must be using BRPG v1.4i or higher.

Here is a preview picture to give you an idea of what this artpack contains (exception: the water texture used in the image below is from the Mapping Tiles artpack, and is not contained in this Mines artpack). Click on the image to view it at full size. 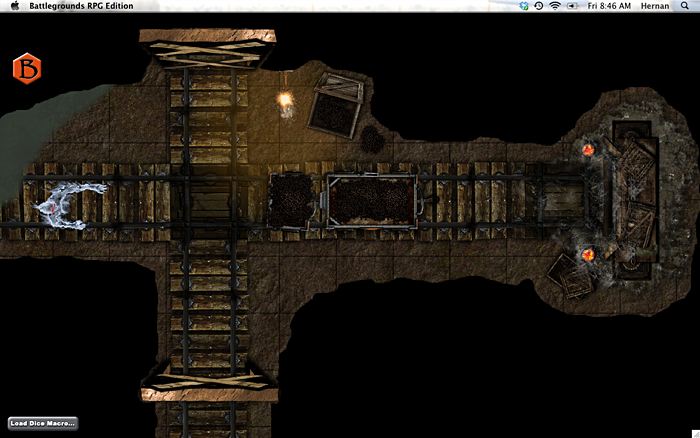 Installation instructions are included in the zip file. Only the GM needs to install these files. Players do not need to download or install the Unit Palette, but they will of course need to download and install whichever artpack/s the GM plans to use in his/her game sessions.


How To Use the Unit Palette
Load the included Encounter file. This will automatically load the relevant Media Asset Bundle (which contains the rendered text labels). The Encounter will present you with a blank map canvas, with the Unit Palette located just above the map. Simply copy a unit from the palette that you wish to place on the map, paste it to the desired spot on the map, and then use the token-swapping hotkeys to select the exact token you wish to use. When you are satisfied with your token selection, select the "Keep Only Current Token" command from the unit's contextual popup menu. After fine-tuning the exact placement of the unit on the map window (and perhaps adjusting the stacking order of the unit using the Unit Manager), you will probably want to select the "Tile" command to lock the unit in place and force it to be drawn underneath the grid overlay and figure bases.

The Unit Palette also comes in Deployment format, so that you can easily import the Unit Palette into any existing Encounter to continue fleshing it out.

Regardless of whether you use the Encounter or the Deployment, when you no longer need the Unit Palette on the map window (e.g., if you are finished creating your layout), simply select the entire Unit Palette with the selection marquee and delete it from your Encounter.

SuperCaptain, if you happen to read this, please contact me via email. Thanks.

The artist who created this artpack is currently running a Kickstarter campaign. If you like his work, you should check it out. Only 6 days remaining!