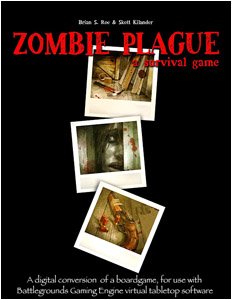 Game Summary:
In this cooperative game of humans vs. zombies, the humans must race to barricade all the doors and windows of a house, search the house for helpful items and weapons to defend themselves with, and they must do all this while fighting off an ever-growing horde of shambling zombies.

The zombies, of course, just want to eat the humans. Zombies are slower than humans, but they make up for that shortcoming through sheer numbers.

The humans can also try to escape using the car in the driveway (if they happen to find the car keys), but they'll have to make it to the car. Or perhaps they can find the hidden cellar and take refuge in there until help arrives...

Number of Players:
2-6, with one player controlling the zombies. Can also be played solo, using automatic zombie movement rules.

Estimated Playing Time:
45-90 minutes (use of VOIP is highly recommended for online games)

About the Game:
"Zombie Plague" is a Print-and-Play boardgame by Hackwerks Games. It was originally released in 1991, and has since developed a fan base which continues to refine and expand on the game system with additional expansions. The original Print-and-Play game can be downloaded from [urlx=http://www.fortressfigures.com/zombieplague/]here[/urlx].

This digital conversion of Zombie Plague for use with BGE is being released with permission from the original designers.

Zombie Plague is simple, fast, fun, easy to learn, and very strongly themed (it is very reminiscent of the classic George Romero zombie movie, "Night of the Living Dead"). Every game of Zombie Plague tells a story, almost as if you were in an interactive zombie movie. It's even fun if you get killed, since you come back as a zombie and can continue playing, now intent on killing your former teammates.

Zombie Plague's game system is very flexible and highly suitable for tweaking (by adding house rules), if you are so inclined.

The above download contains everything needed to play the game (including a BGE-specific version of the rulebook) if you already have at least one Gamer Client license (v1.0 or higher). For multiplayer games, the extra players will need a Gamer Client of their own, or they can use the free BGE Demo if the host has enough free Player Slots available for them.

Here's a screenshot of what the game looks like. Click on the image to view it at full size. 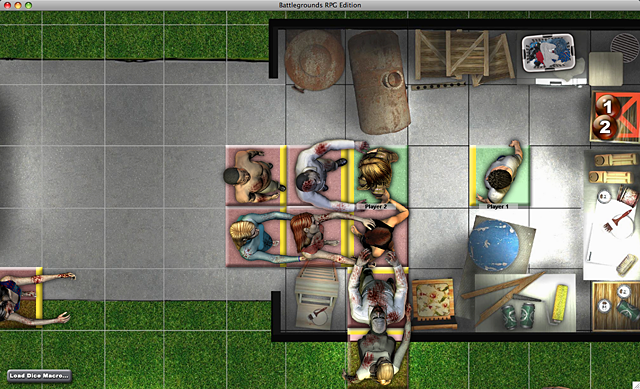 "100 times closer to a Romero movie than any other zombie game published. Beats the board games Maul of America, Last Night on Earth, & Dawn of the Dead on every count. More streamlined, colourful and above all it's a total blast to play."

"Easy rules and quick gameplay, with some strategy thrown in, you can't beat that, especially when it's free!"

"The atmosphere is great, the mechanics are pretty balanced and the final experience is a 10."

"This is great with a few players also i think it can be quite enjoyable to play solo. The game is fun and challenging without being complex."

"The amount of tension in this game can be pretty overwhelming and really keeps the players in the game."

"Of all the zombie games I have played this one seems to catch the theme best."

"This is the zombie game to play. No doubt about it. I have played and purchased others, but now they gather dust."

"The best zombie movie I have ever played."

If you try this game and like it, you should also know that there is an Expansion Pack available for it.

if you're interested in playing "Zombie Plague" and are looking for opponents, please look here.