Search for the Emperor's Treasure boardgame

Search for the Emperor's Treasure boardgame 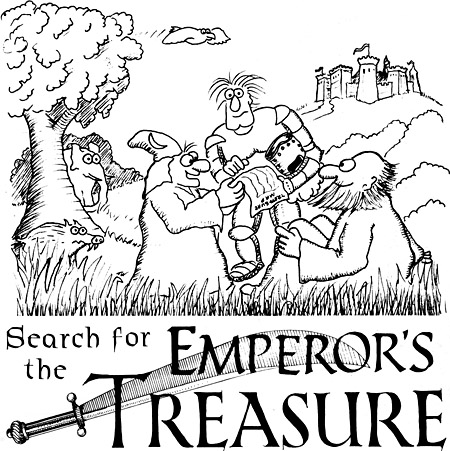 Game Summary:
In this charming, tongue-in-cheek fantasy boardgame (often considered a boardgame version of "classic" Dungeons & Dragons), two to eight players take the role of a fighter, elf, cleric, or magician, then wander around the board collecting arms, treasure, and resolving encounters (which can be good or bad). The game ends when a certain number of Imperial Treasures has been found (depending on how many players are playing) at which point the player with the most treasures wins. Gameplay is competitive (half the fun is throwing nasty encounters on the other players).

About the Game:
This game was originally included in the center of issue #51 of Dragon magazine, in July of 1981, and is generally considered to be the best game ever published in Dragon magazine. In 1990, it was republished as part of a boxed set called "The Best of Dragon Magazine Games".

Here is a screenshot of what the game looks like. Click on the image to view it at full size. 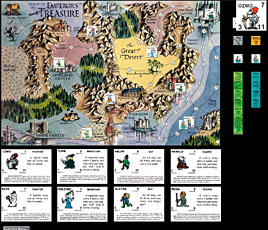 "This has to be the coolest game I ever got out of a magazine."

"This is one of the only D&D-like games which my non-RPG-playing, non-wargame-playing relatives will play -- and even request. A lot of fun, complicated enough to be interesting, simple enough to learn quickly."

"This crushes Runebound into the dirt."

"Great way to package epic-scale quests into a little and unassuming package. Curiously, despite its quaint graphics and jokey humour, probably the best quick game to deliver an RPG experience of a fantasy world adventure."

"A fun, lighthearted fantasy adventure board game. Great for younger players, or to introduce new players to the genre. But there's also plenty to keep an experienced gamer entertained as well."

I have uploaded a new version of the "Search for the Emperor's Treasure" zip file. This new version adds support for BRPG v1.6m, taking advantage of new features such as Views and antialiasing. I also found and fixed a couple of typos in the rulebook.

Customers who have already purchased this Game Box will be sent new download links via email. If for some reason you do not receive the email by late tomorrow, please contact me.

if you're interested in playing "Search for the Emperor's Treasure" and are looking for opponents, please look here.

Please help spread the word about BRPG and BGE, and never hesitate to tell me how I can make them better suit your gaming needs.
Top
Post Reply
4 posts • Page 1 of 1