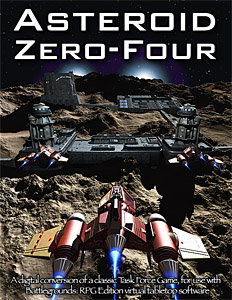 The "Asteroid Zero-Four" Game Box is an updated and enhanced digital version of a long-out-of-print game. It is being re-published with permission from the original designer (and current copyright holder), Stephen V. Cole (who is most known for his highly successful "Star Fleet Battles" games and expansions).

Originally published in 1979 by Task Force Games as one of their [urlx=http://www.boardgamegeek.com/wiki/page/Task_Force_Games_Pocket_Games]Pocket Game series[/urlx], "Asteroid Zero-Four" is a two-player science-fiction game portraying a nuclear war between two mining bases in the asteroid belt of our solar system. Each player commands an asteroid base equipped with laser turrets, command bunkers, ore processing plants, landing pads, and defensive missile launchers. Each player also has spacecraft, missiles, and an arsenal of nuclear ordinance at their disposal to attack the enemy asteroid base with. Spacecraft can be used either as defensive interceptors or to deliver nuclear warheads. Each nuclear warhead that impacts an asteroid is calculated for yield, burst height and blast radius; resulting in damage to the various installations on the asteroids. After each attack, any surviving spacecraft return to their base for repairs and refueling. Engineering teams on each base attempt to repair damaged structures on the asteroid to keep key systems operational, but are themselves vulnerable to nuclear and conventional explosions. To win, you must destroy or disable the enemy mining operations in a fixed number of turns, while trying to keep your opponent from doing the same to you. Each player is therefore simultaneously concerned with offensive and defensive options.
Complexity Level: Moderate

I invite everyone to [urlx=http://www.battlegroundsgames.com/A04_Rulebook_Preview_for_BRPG.pdf]download the first ten pages of the 42-page rulebook[/urlx] to learn more details about the game and to see if it peaks your interest. 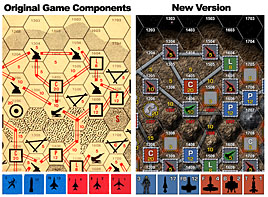 So what exactly is a "Game Box"? Game Boxes for BRPG are simply a distribution package, which includes an artpack containing the playing board (generally a map), digital tokens (in lieu of cardboard counters or plastic minis), and the game's charts and tables. Game Boxes will also include the following files: dice macros, Encounter and Deployment files, custom Turn Sequencer settings and Preferences, a rulebook in PDF format (searchable), and installation instructions. In short, everything needed to play the game if you already have at least one GM Client license (BRPG v1.6m or higher). For multiplayer games, the extra players do not need to purchase the Game Box, but they will need a Player Client or a GM Client if the person hosting the game does not have a Floating License for them to use.

I am also including templates for creating your own custom game tokens that match the official game tokens (very handy for players that love the game and would like to expand it with their own units).
Last edited by heruca on Sun May 22, 2011 5:44 pm, edited 4 times in total.

Edited the OP to add another preview graphic.

"One of my favorite wargames. Complex, but very meaty."

"Surprisingly deep strategy for such a simple game."

"Of all the micro-games I owned back in the day, this was one of my favorites."

"This was one of my first wargames, and I loved it. There are very few wargames that let you play with nukes!"

"The game plays well, with no obvious loopholes, and I found the more I played it the more I could do with it. However the game falls between two stools. Although obviously marketed at teh Micro-Games end of the market, the designer has given us too much. Micro's are intended as short snappy items, teachable in a few minutes, which Asteroid Zero-Four is clearly not. The game as presented is a quart in a pint pot."

"This is a great game. It might as well be "Carrier battles in space", because that's what it feels like. Only the carrier is an asteroid. And you get to use nukes!"

I have uploaded a new version of the "Asteroid Zero-Four" zip file. This new version adds support for BRPG v1.6m, taking advantage of new features such as Views and antialiasing. It also fixes an issue with the height of the gameboard being incorrect, a "backwards-compatibility bug" which was introduced somewhere around BRPG v1.6i.

Customers who have already purchased this Game Box will be sent new download links via email. If for some reason you do not receive the email by late tomorrow, please contact me.

Please help spread the word about BRPG and BGE, and never hesitate to tell me how I can make them better suit your gaming needs.
Top
Post Reply
4 posts • Page 1 of 1