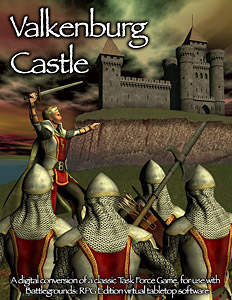 The "Valkenburg Castle" Game Box is an updated and enhanced digital version of a long-out-of-print game. It is being re-published with permission from the original designer (and current copyright holder), Stephen V. Cole (who is most known for his highly successful "Star Fleet Battles" games and expansions).

Originally published in 1980 by Task Force Games as one of their [urlx=http://www.boardgamegeek.com/wiki/page/Task_Force_Games_Pocket_Games]Pocket Game series[/urlx], Valkenburg Castle is a fantasy game of adventure and combat in the depths of an ancient dungeon. Players may use heroic leaders, clever burglars, staunch dwarves, mysterious magic users, and squads of fighting men to explore, and eventually to capture the castle from evil orcs, sorcerers, trolls, ogres, and other monsters (including a dragon!). Two or more players maneuver their units on a game map which depicts the five levels of the dungeon beneath the castle (the game is played in three dimensions). A solitaire scenario is included, and there's even a game variant which lets you assault the dungeon with modern combat squads equipped with rifles, submachine-guns, hand grenades, and demolition charges. The game features 5 scenarios and a campaign game.

I invite everyone to [urlx=http://www.battlegroundsgames.com/VC_Rulebook_for_BRPG_Preview.pdf]download the first ten pages of the 57-page rulebook[/urlx] to learn more details about the game and to see if it peaks your interest. 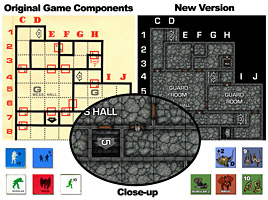 So what exactly is a "Game Box"? Game Boxes for BRPG are simply a distribution package, which includes an artpack containing the playing board (generally a map), digital tokens (in lieu of cardboard counters or plastic minis), and the game's charts and tables. Game Boxes will also include the following files: dice macros, Encounter and Deployment files, custom Turn Sequencer settings and Preferences, a rulebook in PDF format (searchable), and installation instructions. In short, everything needed to play the game if you already have at least one GM Client license (v1.6m or higher). For multiplayer games, the extra players do not need to purchase the Game Box, but they will need a Player Client or a GM Client if the person hosting the game does not have a Floating License for them to use.

I am also including templates for creating your own custom game tokens that match the official game tokens (very handy for players that love the game and would like to expand it with their own units).

I have uploaded a new version of the "Valkenburg Castle" zip file. This new version adds support for BRPG v1.6m, taking advantage of new features such as Views, Secret Token, and antialiasing.

Customers who have already purchased this Game Box have been sent new download links via email. If for some reason you did not receive the email, please contact me.

By the way, if you're interested in playing Valkenburg Castle and are looking for opponents, please look here.