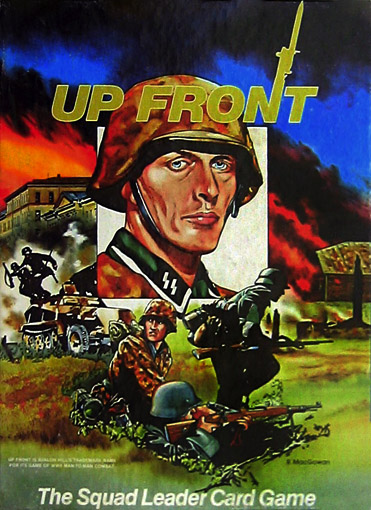 Game Summary:
Each player directs a squad of men in various World War II scenarios with cards driving the action (there is no gameboard).

About the Game:
This is a BRPG digital game conversion of the long-out-of-print [urlx=http://www.boardgamegeek.com/boardgame/586/up-front]"Up Front" card game[/urlx], by Courtney F. Allen (originally published by Avalon Hill in 1983). "Up Front" is a card game that is loosely based on Avalon Hill's Squad Leader series of wargames. This digital conversion includes not only the basic Up Front game, but also the components from the "Banzai" and "Desert War" expansions, so you will be able to play any of the seven nationalities (Germans, Americans, Russians, Japanese, British, French, and Italians) covered in these games.

Number of Players:
2 (but there are variants and scenarios for accommodating more players, and even for playing solitaire)

Game Scale:
Each card and counter represents an individual soldier, weapon, vehicle, or piece of equipment.

Estimated Playing Time:
About 1 hour (use of VOIP is highly recommended for online games)

Complexity Level:
Moderate to Complex (depending on the use of optional rules and vehicles)

The above download contains everything needed to play the game (except the rulebook) if you already have at least one GM Client license ([urlx=http://battlegroundsgames.com/forums/viewtopic.php?t=2845]v1.6k[/urlx] or higher). For multiplayer games, the extra players will need a Player Client or a GM Client. A player can also use the free BRPG Demo if the person hosting the game has a Floating License for them to use.

Enjoy!
by heruca
I wanted to point out a couple of things:

2) This free game conversion differs from other game conversions I've done in that it may not always remain available for download, and even if you already downloaded it, it may cease to work. There is a "kill switch" in place just in case Avalon Hill/Hasbro has a problem with this game conversion (not very likely, since this is a re-design with all-new artwork, and I am not including the game rules).
by heruca
The following quotes are what some gamers on boardgamegeek.com had to say about this game (in reference to the original printed game, of course):

"A true classic. Strategy, tactics and tension in a relatively quick fun format."

"One of my favorite games of all time. A card game which manages to capture the fog of war, the terror of combat, and the "make-do" ability of commanders all at once. The rules can be a bit of a bear, but start off slowly and you'll be in for a treat."

"Exciting, realistic, playable and rewarding to play. An excellent translation of squad leader to cards. Slight luck aspect but not that significant as the game is so enjoyable. Played countless games and still holds up today. One of the AH classics and one of my top 5 of all time games, a must have."

"By far my favorite wargame. A game you can play in an hour or so and replay every scenario and never have it go the same way twice."

"Strategy is very much rewarded and players who know how to employ the advantages of their squad (nationality, weaponry, group setup etc.) will beat their opponents most of the time."

"In my opinion, the best wargame ever made. This was a couple of decades ahead of its time."

"There are very few games that I have played in my life where I felt like I was in the presence of something truly great, innovative, and utterly magnificent. DUNE is one of them, SETTLERS OF CATAN is one of them, and UP FRONT is one of them."

"I've played this game for twenty years and haven't tired of it. Definitely worth the effort if you are interested in squad-level WWII infantry actions. Probably my favorite wargame of all time."

"A real nail-biter, IMHO the best individual-level tactical squad game out there."

"The best tactical WW2 combat game in existence (and that's saying a lot)."

"Astonishingly good. Just keeps getting better & better the more I play it. Much easier to play than a first reading of the rulebook would suggest. I still can't quite work out how a card game can feel so realistic."

"One of the very few wargames that forces you to "see" the situation not from a god-like top-down view, but from more of a first-person perspective. The only game I've ever played that smacks of genius."

"Really good two player card games are difficult to design, but this is probably the best card game of any type that I've ever played."

"A great game - the unconventional mechanics take a while to become familiar, but it's well worth it. Almost infinite replayability, and a strong fan-base, with some good home-made variants. Don't wait for the fabled reprint - bite the bullet and get a copy somehow now."

"The cards make for a fast flowing, shifting game that still rewards the player who knows how to manage resources and risk."

"It's such a home run of game design, showing that playability and realism are NOT opposite ends of a scale. You CAN have both."
by heruca
Here are some screenshots of what the game looks like in Battlegrounds. Click on the images to view them at full size.

Overview of a game in progress: 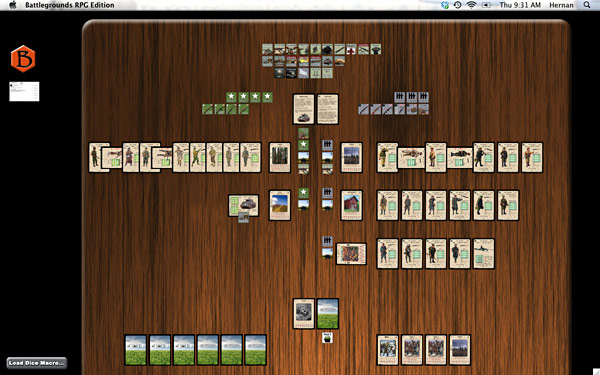 A close-up of the cards and counters: 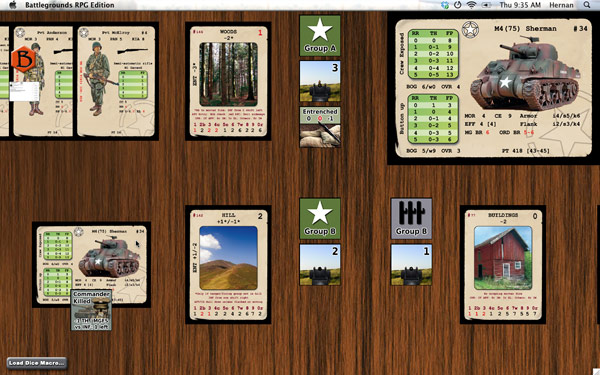 Selecting your forces for a "Design-Your-Own" Scenario: 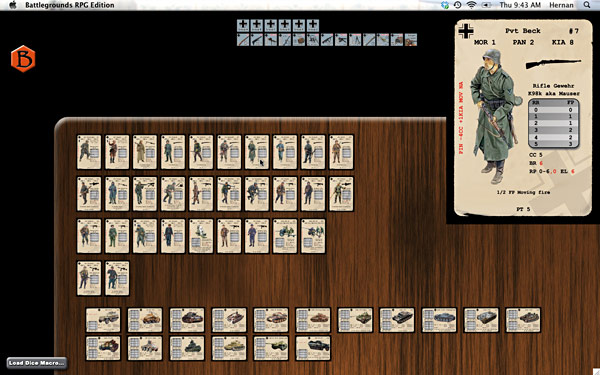 Customizing the Action Deck for a "Design-Your-Own" Scenario: 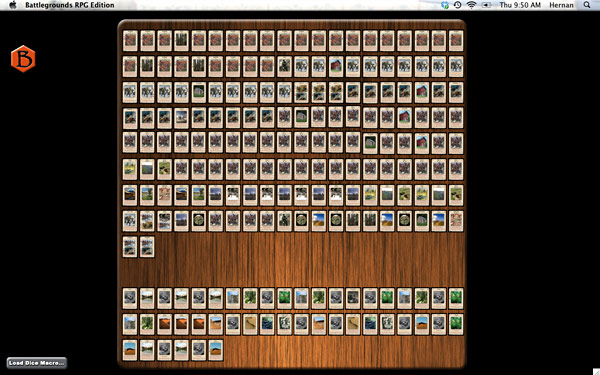 by martimer
Looks great. Just let me know when the wargame version of the software is ready and I am IN. I think I may finally be ready.
by heruca
Welcome, martimer.

I'll begin working on the wargame-specific version (BGE) once BRPG has a new official release. I had hoped to get it out in time for Christmas, but it's not looking too good, right now.
by martimer
Sorry to hear about the new delay. I had seen elsewhere in the forums a Q4 2010 release date. I am also programmer, and really should have known better. No problem. It runs on the RPG version, so now all I have to do is get over my revulsion to online play, find an online opponent, buy the software and go to town.

Apologies for getting slightly off-topic.
by rrvistas
Wooha, you did up-front!?!
I own this game for 20 years but never found some one to play it with!
Maybe now!

THANK YOU!!!
by heruca
If it's in new condition, it's worth a good chunk of change. Do you have either of the expansions for it?
by rrvistas
i just have the basic game.
beside the fact that the cardboard stuff is seperated for play and the counters are punched out, the game is as good as new.

BTW, any chance that you can provide us with that cool Wood table object?
by heruca

rrvistas wrote:i just have the basic game.
beside the fact that the cardboard stuff is seperated for play and the counters are punched out, the game is as good as new.

You could probably get somewhere in the neighborhood of 150 euros for that. Or just send it to me, so I can replace my worn out Action Card deck.

rrvistas wrote:BTW, any chance that you can provide us with that cool Wood table object?

Just load any Encounter from this release, select "Clear All Units", and resave the Encounter under a new name. You now have the table ready to use in your own Encounters, and you can resize it to suit your needs using the Map Settings panel.
by rrvistas

heruca wrote:Just load any Encounter from this release, select "Clear All Units", and resave the Encounter under a new name. You now have the table ready to use in your own Encounters, and you can resize it to suit your needs using the Map Settings panel.

Worked, but how can I include it in already existing encounters without redoing everything?
by heruca
Edit your existing Encounter in a text editor and rename the map to "Wooden Table". The map is the third text element (shown in green below).

heruca wrote:Edit your existing Encounter in a text editor and rename the map to "Wooden Table". The map is the third text element (shown in green below).

rrvistas wrote:Wooha, you did up-front!?!
I own this game for 20 years but never found some one to play it with!
Maybe now!

Let me know when you want to try it out. I should be able to run a game some time this week.
by DaveyJJ
I just managed to replace my long-gone copy with a near mint condition copy ... counters still unpunched, while plastic tray intact, cards out of cellophane but never used, box showing only very very minor wear, for US$65 (plus shipping). The best deal I've ever made for a used game, ever, ever. Will check out the module using the great new fan-redesigned cards here too. Love Up Front.
by heruca

DaveyJJ wrote:I just managed to replace my long-gone copy with a near mint condition copy ... counters still unpunched, while plastic tray intact, cards out of cellophane but never used, box showing only very very minor wear, for US$65 (plus shipping). The best deal I've ever made for a used game, ever, ever.

Coincidentally, so did I. I paid $75, with free shipping. I think we both scored a pretty rare deal. Paying twice as much (or more) is not unheard of, for this gem of a game.

I intend to play it with my kids when they grow up.

Re: "Up Front" card game

by heruca
The rulebook for Up Front can now be downloaded for free from WargameVault. The original card game is also available as a print-on-demand title, in case you wish to purchase a physical copy of this great game.
All times are UTC-03:00
Page 1 of 1
Powered by phpBB® Forum Software © phpBB Limited
https://www.phpbb.com/