"The Dungeon of D" card game

"The Dungeon of D" card game 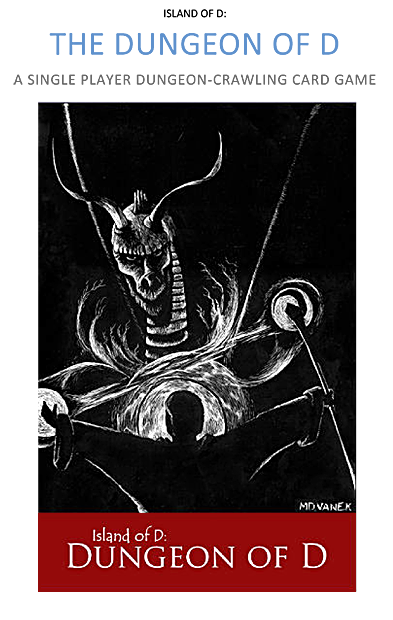 Game Summary:
A solitaire dungeon-crawling card game with no bookkeeping and no dice. Just you, the cards, a token and a dungeon to explore! Your mission: Get out of the dungeon alive as rich as you can. And if you are able to, find and bring back the Amulet of Deugor!!

About the Game:
This is a BRPG digital game conversion of the free print-and-play "Dungeon of D" card game, by Jack Darwid (web-published, 2008). This digital conversion for use with BRPG is being released with permission from the game's designer.

The above download contains everything needed to play the game if you already have a GM Client license (v1.6j or higher).

Enjoy!
by heruca
The following quotes are what some gamers on boardgamegeek.com had to say about this game (in reference to the original print-and-play game, of course):

"I am utterly impressed. The mechanics involved in the game's design are both simple and brilliant. Truly artful game design. The power card system is a masterpiece, makes me wish I was clever enough to concoct such a design."

"This is an extremely clever and well designed solitaire game. There are some well thought out mechanisms that balance the advantages and disadvantages of playing each card. The cards are multi purpose, a feature that always makes for interesting decisions."

"Innovative use of cards. The 'power' deck counts as hit points, items, potions, monster checks, and ability checks. Makes for some tough decisions. The rules are concise and easy to follow."

"The game play is engaging and does a very good job of capturing the feel of classic dungeon crawls." 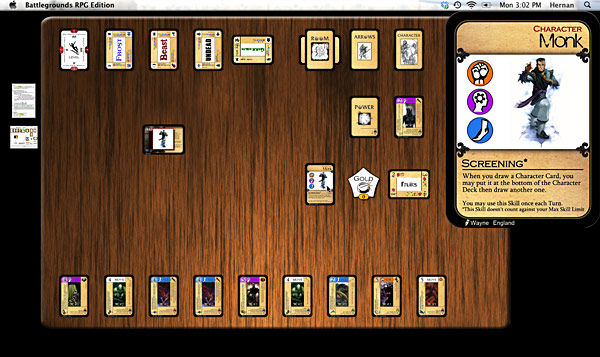 Closeup of the Inventory: 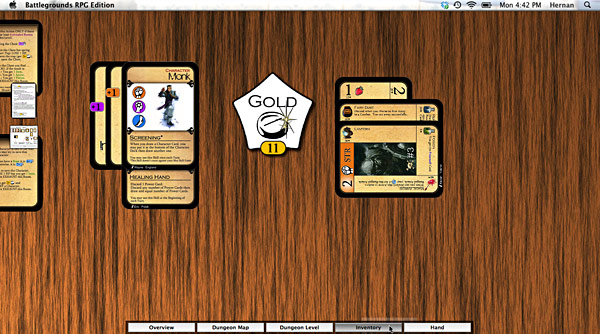 by rrvistas
Looks interesting. I will try it as sson as I can download 1.6J
by heruca
Let me know how you like it, once you've had a chance to try it out.

This was my experience: the first game took many, many hours, as I was constantly looking stuff up in the rulebook to make sure I was playing right. But starting with the second game, I had pretty much internalized the rules and it started to flow really well. From then on, the game just flew. On occasion I'll get stuck because the game throws me some very hard choices about which course of action I should take, leading to some minor "analysis paralysis", but I happen to enjoy those tough decisions. Do I push my luck and try to find a safer room to rest in, or will doing so result in a quick demise?
by MadWelshWizard
All I can say Heruca is well done mate, another fantastic Battlegrounds (BRPG) game conversion

I've just played this (on my netbook, an Asus 1005HA) on my holidays on Crete whilst my girlfriend had a siesta.

I'd not played Dungeon of D before but had actually started making an Island of D module myself. Your electronic version is superb. I took about an hour out to read your word document, setup and to read the rules. And then with the aid of the cracking on-screen rules summary cards my game flew through to the end.

I sadly died relatively quickly as my tactics left a lot to be desired but I'll be playing the game again very soon.

Dungeon of D doesn't have many rules but they do take a bit of a go to first get the hang of them but once you've played one game you don't need the rule book much at all.

I tweaked the Overview view slightly so I could get the whole main game play area on my little screen but that's the beauty of BRPG, you can tweak to your hearts content.

Craig
Webmaster
Orcs in the Webbe
http://www.orcsinthewebbe.co.uk
by heruca
Thanks for the feedback. Glad you liked it.

MadWelshWizard wrote:I tweaked the Overview view slightly so I could get the whole main game play area on my little screen

Yeah, the default Views were laid out for 1280x800 resolution, unlike some other game conversions in which I aim to support 1024x768 (the minimum officially-supported resolution for BRPG). Fortunately, pressing Shift + Alt while clicking on a View button makes it pretty quick and easy to tweak the Views.
by heruca