Time for another bug hunt!

Time for another bug hunt!

by heruca
I'm itching to try out BRPG v1.4e in a real game, and I'm also itching to play my Aliens boardgame conversion again, which I've just finished updating to support the new features in BRPG.

I'd like to run a one-shot game on Saturday, February 28th that will run for about two hours (less, if the aliens have their way). My schedule is pretty open, so if you'd be interested in playing, post when is good for you and I'll try to pick the time slot that accommodates the most people. 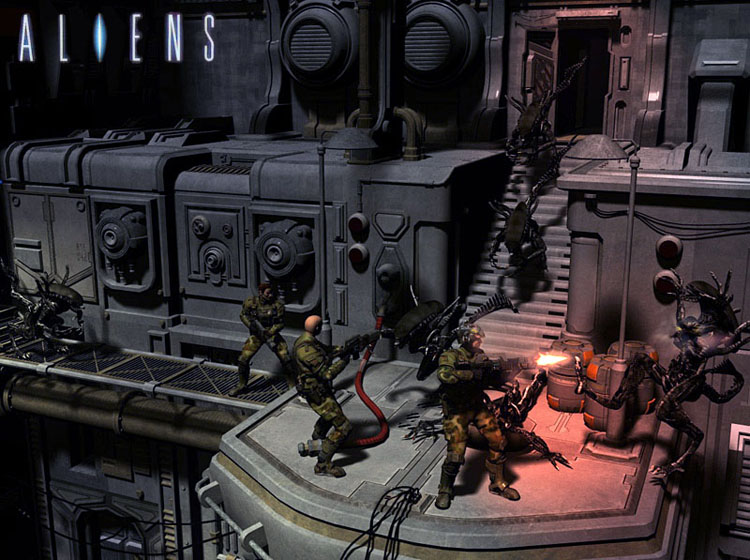 , so you can use the free Demo if that's all you have), a microphone, and Ventrilo (for voice chat).

Game System being used:
The "Aliens" boardgame, by Leading Edge Games. This is not an RPG, but a fast-paced boardgame based on the 1986 sci-fi movie "Aliens", by Twentieth Century Fox. However, fans of the Aliens movie may well find good opportunities to get into character and do a little roleplaying. You do not need to own a copy of the game or even know how to play. The rules will be explained in about 15 mins. prior to the start of the game.

Number of slots for players:
2-9.
3 to 4 players would be ideal, but I can take as many as 9 players. Depending on the number of players that show up, each player will control between 1 and 3 characters (and don't expect them all to survive, it can be a deadly game)

General Notes:
We will be playing the Reactor Room scenario, where 9 Colonial Marines with limited armament must fight their way to the APC that will evacuate them to safety.

Fans of the Aliens movie should find this game very enjoyable, and fans of the boardgame will be pleasantly surprised by how much the gameplay and atmosphere are enhanced by the software. Visual aids, sound effects, and music will be used.

If you're interested in playing this but you can't make it that day, no worries; I'll be running it again at iCon 2009, this April (probably Easter weekend). This is sort of a trial run for that event, to make sure everything goes smoothly.
by Arimmus
Awe damn, I was looking forward to something like this.. I wish i was home during that

oh well I will catch you next time.
by heruca
This game still hasn't taken place, due to a lack of players, so I now plan on running this soon after I return from my current trip.
by Full Bleed

heruca wrote:This game still hasn't taken place, due to a lack of players, so I now plan on running this soon after I return from my current trip.

Hopefully with more than a 1 day notice!

by heruca
OK, I now plan to run this game next Saturday, February 28th. Time TBD, based on when most of the interested players can make it (please post your availability).

We will be using BRPG v1.4e. I've edited the opening post to reflect the new game date and new version number.
by heruca
Today's game day. Anyone here interested in playing? So far I've got two possible players from the FUM forums.
by heruca
Sigh. Once again, this game had to be cancelled due to only 1 player showing up.

So I'm going to try once more, but this time I'll try recruiting players from boardgamegeek.com first, to try and ensure there's enough players to participate.

Sunday, March 15 will be the next game day. Plenty of advance notice this time around. We'll be using BRPG v1.4e.
by Arimmus
lol, Okay Sunday march 15th eh? Well I will play but only if i know the rules. Could you send me a link to a PHB or something? I really would love to play! Give me time and I will try to make it... The only thing that will hinder that I play is work... hardly happens but the job i working on is behind... So if i go in thirds it will be rare... Otherwise, G2G baby!
by heruca
Someone posted a summary of the rules here.

by dunadin777
I'm new to BRPG, but I'm really excited to play around with it. I'm an avid RPGer who usually ends up GMing and I'd love to join you this next Sunday. BUT I don't have a headset or ventrillo. There's a chance I might be able to get them by the weekend, but if not, am I still welcome? Or is the game going to be chat intensive to the point where typing will be insufficient?
by heruca
Welcome, dunadin777.

The Ventrilo requirement is there because it will be a chat-intensive game (especially since the rules will be covered) and the game would bog down to an unbearable crawl if we have to limit ourselves to the speed of the slowest typist.

Headsets are nice to have, since they cut down on background noise, but a $5 mic from the likes of Radio Shack/Target/Wallmart/Best Buy will do in a pinch.

I'd love to have you play, so I hope you can manage to get or borrow a mic.
by dunadin777
Sounds good. Thanks for the quick reply and welcome. I'm downloading Ventrilo for mac, and I'll be asking around if I can borrow one for the weekend. Worse comes to worst, I'll be buying one since I've been jonesing for some good RP for some time now.
by Arimmus
Time???? So i can like prep for it and stuff

Re: Time for another bug hunt!

heruca wrote:My schedule is pretty open, so if you'd be interested in playing, post when is good for you and I'll try to pick the time slot that accommodates the most people.

by nightwalker450
If its late evening (after 8pm CST) I might be able to join. Have to wait till after the kids have gone to bed.

I'll need to see if I still have Ventrilo or not, and get it downloaded. I'll also see if one or two of my other group members might want to join in. Usually there's a few of us just playing WoW on Sunday nights.

Also will it be version 1.4e?
by heruca

nightwalker450 wrote:will it be version 1.4e?

Either that or v1.4f, which should be out by then. I'll be sure to post here when it's decided.
by dunadin777
Anytime between 2PM and Midnight CST is good for me.
by nightwalker450
Looks like 2 more guys from my group might be available to help test out as well, if you can run it after 8 CST.
by Arimmus
2 pm and midnighht works for the Ari man Lets do it!
by heruca
Looks like there's enough interest that I may run an afternoon session and an evening session.

by Arimmus
I just need to get my mind off work and all that, LET ME KILL STUFF!!!!! lol PLay on guys!
by nightwalker450
Idea for time(s) yet for tomorrow?
by dunadin777
I will be available to play from 4PM CST(not 2PM, as earlier stated) through the rest of the night. Also, Heruca: will you be posting your IP address right before the sessions begin?
by heruca
I'll provide my IP address and a download link via email or PM to everyone who has stated they can play sometime today.
by Arimmus
I got you all set on my yahoo... So yeah
All times are UTC-03:00
Page 1 of 2
Powered by phpBB® Forum Software © phpBB Limited
https://www.phpbb.com/